11 Feb Communication is essential when lives are on the line.

Posted at 09:59h in Latest News by freedom 0 Comments
0 Likes 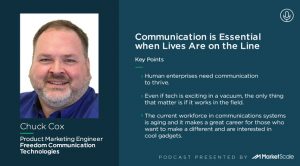 Communication technologies are so readily available and so widely accepted that it’s possible for the general public to take them for granted.

“This is somewhat overlooked in our day and age,” said Chuck Cox, Product Marketing Engineer at Astronics Test Systems, on this episode of the Software and Technology podcast. “But, when lives depend on it, maybe we need to be thinking more ahead of time, ensuring that our technologies work.”

Cox spoke with MarketScale’s Tyler Kern about the importance of effective communication devices and infrastructure.

“In order for human enterprises to function properly, they have to be able to communicate with each other,” Cox said, noting that it’s not just about high-tech devices, but about basic human interaction.

A while back, he made the switch from being a product development engineer to a more customer-facing career. He wanted to know that the solutions he offered had real-world applications.

He recalled a time when first responders from multiple jurisdictions gathered to respond to a catastrophe. Despite these heroes being able to visibly look one another in the eye, they were not able to speak on the radio.

The event Cox recalls are the terrorist attacks of September 11, 2001.

This illustrates that, no matter how cool the tech, all that matters is real-world application.

“When you’re talking to grandma about dinner and she says, ‘apple pie,’ and the word ‘apple’ drops out, that’s of no consequence,” Cox said. “If an officer is being told ‘don’t shoot,’ there’s a big difference.”

As an example, Cox recalls working with the Dallas Cowboys of the NFL, whose expectations were 100% communication. For them, if one word drops out during a play call, it’s worse than if there had been no communication at all.

Sorry, the comment form is closed at this time.